Parisians are proud of their subway system. Though more than a hundred years old, the system is vast, effective, and well-managed, and it is still growing. Imagine that more than 6 million passengers are transported by the subway system every day, you can understand what a powerful network it is. It is said that from any location in downtown Paris there is a subway station not farther than 500 meters from you.

Using the subway as a means of transit is the Parisian way of life. When discussing a location, Parisians always mention the name of the nearest METRO station. If you are invited by a company to visit their office, don't be surprised if they do not arrange to pick you up, but instead give you directions from the subway. The subway is more convenient, and avoids traffic jams. It is the easiest way around, even if you are new to Paris.

What we have been referring to as the "subway" is, in fact, two systems in one. The Metro (short for Metropolitan) has 14 lines (numbered 1 through 14), and runs in downtown Paris. The RER (Reseaux Express Regionale - read as Regional Express Networks) has 5 lines (lettered A through E), and runs through both downtown and the suburbs.

There are several ticketing options available for those using public transit: individual tickets, the "Paris Visite" pass, the "Mobilis" pass or Navigo Pass. Each of these is described in some detail below. Of all these kinds of tickets, you will be interested in Paris visite and Mobilis most likely.

For the downtown area are valid within zones 1 and 2. Each can be used for a single trip on the Metro, RER, bus, or tram. The price is 1.60 euros for one ticket or 11.60 for 10 tickets (called a Carnet). Children from 4 to 11 years old can have half price discount for a Carnet, say 5.80 euros for 10 children tickets.

The Mobilis is a one-day ticket that allows unlimited travel on the Metro, RER, bus, RATP, ADATRIF, APTR, and SNCF suburban network. It excludes the Orlybus, Orlyval, Roissybus, Roissyrail and Orlyrail. Price is based on area of coverage, for Zone 1 - 3, it is 7.90 euros.

The Paris Visite pass is a bit more expensive than the Mobilis. It comes as a card with a coupon attached and opens the doors to the whole Ile-de-France network : Metro, RER, Buses, Trams, SNCF overland suburban trains, the Montmartre funicular, Montmartobus, Noctilien and the Optile bus network, depending on the zones you choose (Zone 1 to Zone 3 or Zone 1 to Zone 6).

The pass becomes valid from the first day of use (and not when you buy it), so you can buy it ahead of time and miss out on last-minute queues. The whole day is billed, whatever time you start to use the pass during operating hours (between 5.30 a.m. and 1 a.m.). Once you have bought your ParisVisite pass, fill in the card with your name and first name. Take care to write the serial number of the card on the coupon and add your planned start date. The card and coupon must be kept together and produced for inspection when requested.

Navigo pass, mainly for local residents, but visiters can also use it.

The Navigo pass or Passe Navigo is a means of payment for public transportation introduced in the ile-de-France region introduced in 2001. It is implemented as a Smart Card, and enables authenticated access at turnstiles by waving the card near an electronic reader.

The pass is available either attached to an account for residents of the ile-de-France (known simply as Passe Navigo) or as an anonymous pre-paid card. While the account based passes are free, a Decouverte pass costs 5 euros at ticket booths. The passes can be credited at ticket booths and machines for weekly, monthly or annual use.

Navigo passes can be used on the vehicles of the RATP, the SNCF (within the Transilien network), Optile, and companies under the aegis of the Syndicat des transports d'ile-de-France (STIF), as well as with the new Velib bicycle rental system. 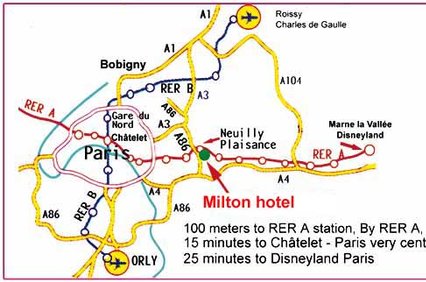